Find Articles
Find out how the library is organized


The Boardspan staff reviews and selects the most informative articles from business news sources, including:

We categorize articles to make them easier for you to find.

by Glenn Kelman and Bridget Frey

Only a month before Twitter hosted 2013’s most highly anticipated public offering, The New York Times’s Claire Cain Miller asked why the company’s board of directors was entirely male. The article jolted an industry accustomed to seeing itself as an enlightened alternative to traditional businesses.

Since then, a lot has changed. Redfin looked at the board appointments between January 1, 2013 and July 1, 2016 for the last 100 technology companies to go public. We found that 80% of the 381 appointments were indeed male, but what was surprising was how quickly the gender ratio of those appointments shifted after the Twitter article was published.

Here is the ratio of men to women for all the board appointments we studied: 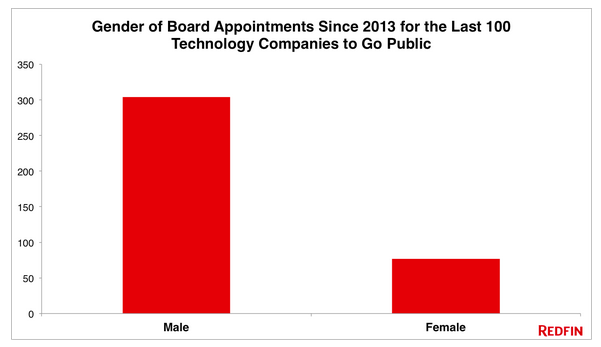 But the year-by-year ratios between female and male appointments show a new trend. 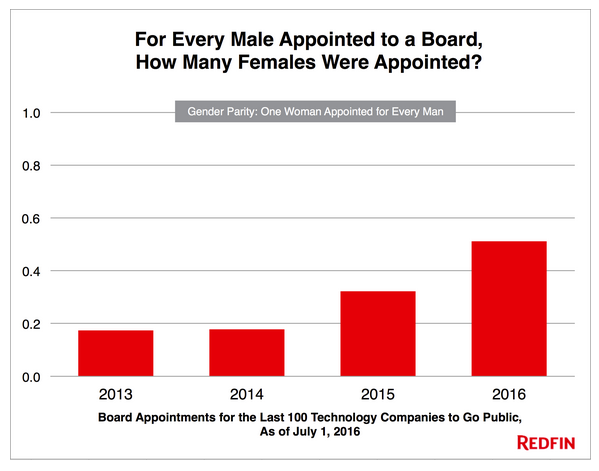 In 2013, which largely took place before the article was published, roughly one woman was appointed to a board for every six men, the same ratio of women to men newly elected to the U.S. senate that year. But in the space of three years, this ratio for the technology industry changed threefold, to one woman for every two men: not at parity, but evidence that the technology industry’s gender diversity can increase significantly.

This increase is also evidence that journalism sometimes drives change faster than any other U.S. institution. Etsy, Care.com, Zendesk, and Twitter each added three female board members since the New York Times article; these four companies alone employ 6,500 people.

Panel Effects in Board Rooms

Women will still be a minority in most board rooms, but it’s worth noting that the presence of just one different perspective affects a group’s decision-making. This effect, known as a “panel effect,”  is well-established in the U.S. appellate courts, where decisions are collegial as in board meetings, but also public. Scholars for years have studied three-judge panels as a laboratory for understanding consensus-building and decision-making, to understand why a single judge from the opposite party has so much influence over the majority decision favored by the other two.

The original premise was that this accommodation of counter-arguments was “strategic,” made only to avoid a Supreme Court reversal, but it turns out that even when there’s no risk of appeal, the influence of the member in the minority is strong: what matters is just hearing another point of view. This phenomenon is most pronounced in gender discrimination cases where a woman participates. Even when she could easily be outvoted by men, she isn’t. The same men just come to different conclusions than they had in previous similar cases.

Board rooms have the same dynamic, where executives who are unused to seeing promotions, pay and succession plans through the lens of gender and ethnicity will start to do so. Because the process of internalizing what a board wants is often so thorough and unnoticed, CEOs may subtly adjust their recommendations before the board even has to utter a word. This is the implicit way power worked when boards consisted of only white men, and it’s how, in our own experience, we have seen boards change now that diversity has modestly increased.

There Are Plenty of Diverse Candidates

There are other implications of this research. That the ratio of female to male board appointments could change in just a few years belies the most common reason cited by male board members for an absence of diversity of all types: a lack of qualified candidates. Back in 2013, it was common to hear company CEOs arguing against “just checking a box,” by appointing a woman only for her gender. But since it seems unlikely that three times as many females became qualified for board seats over three years, we have to conclude that what matters is not just women’s qualifications but the board’s search process.

And this is where we should be clear that the company where the two of us work, Redfin, has recently completed a search for new board directors, culminating in the appointment of Julie Bornstein and Robert Bass, and we had to change our process, soliciting many different sources for candidates rather than relying exclusively on board members’ connections. Of the five independent board members Redfin has appointed, two are female, one of those a person of color.

The absence of diversity is often imagined as malice, and many times correctly so, but it’s also what happens while a person in power is busy making other plans. If you don’t pay attention to diversity, you’ll end up hiring people who are nearest at hand, who have had similar jobs for decades before. This is how society replicates itself from generation to generation, in a process that seems completely innocuous to those who aren’t the ones shut out.

Glenn Kelman is Redfin’s CEO and Bridget Frey is Redfin’s CTO. Thanks to Redfin’s Alex Starace and Allison Dunmore for the underlying research on board appointments. To get data on 100 companies, we looked at 108 companies, excluding five that had been acquired, two that did not publish board appointments clearly, and one that was a spin-out that re-appointed most of its board members from the parent company.

Published with permission from Redfin. For the original article, click here.

Market Forces Make a Case for Ethics in Governance

Best Practices for Board Meeting Preparation

Why Directors Should Thank Dodd & Frank

Why Every Company Needs a Board of Directors

How To Write The Ideal Proxy Statement

Smart Rules: Six Ways to Get People to Solve Problems Without You

Corporate Governance in the Age of Cyber Risks

In collaboration with RANE (Risk Assistance Network and Exchange)

In Boardrooms, the Same Is a Shame

Your library is currently empty. Browse the Boardspan Library to get started.

For security reasons, you will be automatically logged out in:

Log Out
We use cookies to personalize content and to provide you with an improved user experience. By continuing to use this site you consent to the use of cookies.
Please visit our cookie policy for further details.
Thank you for your interest in this service. Someone from Boardspan Client Services will reach out to you directly. ×